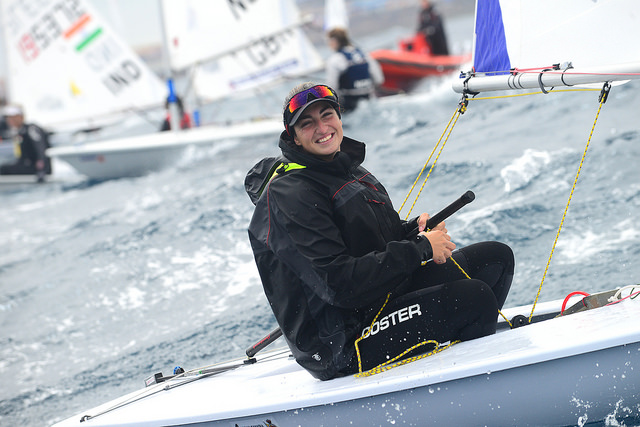 Medalist such as Chinese Xu Lijia – Gold in the Laser Radial in London 2012- or current World Champion in Laser Standard Nick Thompson are examples of the level of participants that will compete this weekend in the Carnival Regatta held in Las Palmas de Gran Canaria, where sailors will have a final test before the European Championship that will take place in the same racecourse at the end of this month.

The weather forecast foresees a typical northern wind and envisages great conditions for the regatta. Carnival Regatta (February 12, 13 and 14th ) will be the last event in Gran Canaria Sail in Winter; the international program organized by Real Club Nautico de Gran Canaria from December to February every year. Interest for the race has spiked as the European Championship for both Standard and Radial Laser classes is around the corner (February 26th – March 4th) in Las Palmas de Gran Canaria and will allow all sailors to fine tune their boats against their rivals with similar weather conditions at the end of the month.

The entire Spanish Olympic team for both Male Standard and female Radial, composed entirely by Canarian sailors will take part in the competition. Three sailors belong to RCNGC (Joaquín Blanco, Joel Rodríguez -current under-21 World Champion- and Martina Reino, and Alicia Cebrian – European Runner-up from RCN de Tenerife. Many of the participating sailors will also represent their countries in the summer Olympic Games in Rio next August 2016.

For some of the sailors this race takes special importance as they can earn vital points to secure a place for Brazil. The best of the best sailors in the world are gathering in the facilities of Real Club Nautico de Gran Canaria, including Marit Bouwmeester, Silver Medal in London 2012 as well as other top 10 sailors worldwide such as Finish Tuula Tenkanen or Swedish Josefin Olsson.

8 races have been schedules within these 3 days and there are almost 200 boats registered: 70 Laser Standard, 100 Laser Radial and 20 Laser 4.7. The Laser Radial fleet will be divided in groups with classifying rounds these next two days and finals on Sunday. First race is scheduled to start at 13:00 this Friday.