The technical team at one of its regular meetings

This February, Gran Canaria will become the European Capital of Olympic sailing

Some of the sailors have been training and preparing for weeks for this race as part of the programme Gran Canaria Sail in Winter that RCNGC organizes every year.

The event has been rise the attention of sailing fans around the world by virtue of qualifying for the Summer Olympic Games in Brazil. National teams around the world have chosen to send their sailors to Guanabara Bay, race course for Rio 2016.
Commodore’s race, a race with great tradition at RCNGC, had the pleasure of hosting sailors from eight different nationalities.

Martina Reino, member of the Spanish Olympic Team from RCNGC alongside Alicia Cebrián from RCNT,  won the race last January.

267 sailors from 45 countries registered for the European open championship, which aggregates the Standard (male), female Radial and male Radial.

More than 90 sailors have chosen to get their boats ready for the European Championship and will participate in Carnival’s Sailing Race on 12th-14th February, as part of Gran Canaria Sail in Winter.
#EuroLsGranCanaria16
European Laser 2016

267 sailors from 44 countries, in the European Laser Senior Championship

By GCSIW Posted on enero 26, 2016 in Laser Radial, Standard Laser 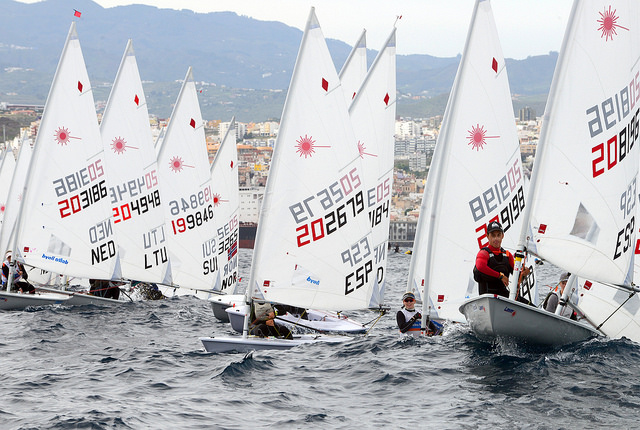 267 sailors from 44 countries have already formalized their registration to participate in the European Laser Senior Championship being held in Las Palmas from 26 February to 4 March.

The Europeans in Gran Canaria serve several Olympic teams like the Spanish or the United States as a selection regatta to designate their representatives in the Rio 2016 Olympic Games, which begin on August 5.

As host country, Spain has the largest team, with a total of 36 sailors. The current Spanish Olympic team is composed of Canarian sailors: Joel Rodriguez and Joaquin Blanco, both of RCNGC in Laser Standard, and in Radial Martina Reino (also of RCNGC) and Alicia Cebrian from Tenerife.

The largest fleet only a month to start the championship belongs to the Laser Standard class, with 130 registered sailors. The most represented continent is Europe with 27 countries. Being an open competition, also sailors from they travel from New Zealand, Peru, United States, Hong Kong and Korea have registered.