The Canary Islanders lead in Radial and 4.7 after a bright windy day

The Canary Islanders lead in Radial and 4.7 after a bright windy day 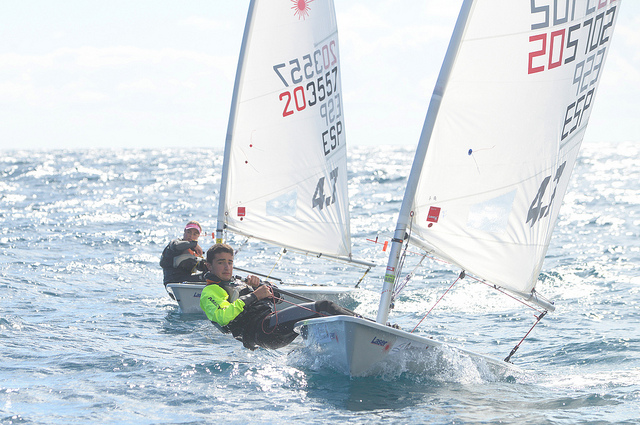 A flat sea, sunshine and an average wind of 15 knots reigned on the first day of the Regata de Carnaval Ciudad de Las Palmas de Gran Canaria and the Europa Cup Gran Canaria 2015.

The Canary Islanders are in the lead in Laser Radial and 4.7 after the first day’s sailing, including a great performance by Lanzarote sailors.

Slovenia’s Zan Luka Zelko is in first place in Laser Standard after the first day and Joel Rodríguez (RCNGC) is the highest placed Spanish sailor. Rodríguez finished 8th, despite a good start with a 5th and and 3rd in the first two regattas. A penalty in the third heat knocked him back in the overall classification.

Martina Reino (RCNGC) is first equal in women’s Laser Radial, with Hungarian Maria Erdi. Reino was placed 3rd, 1st and 3rd and Erdi came in with two 2nd places and a 3rd on the first day of racing. Since November, with a few short breaks, Erdi has been training at RCNGC.

Reino, current youth world champion in the class, was happy with this start, despite the strong wind conditions that “stretched her a bit”, in her own words.

Europa Cup Gran Canaria 2015 has kicked off the series in Las Palmas de Gran Canaria for the first time. The series is made up of 23 events held at 23 locations throughout Europe during the year and is organised by European Region of International Laser Class Association (EurILCA).

Jean Luc Michon, EurILCA chairman, is visiting the club for the event and also to find out more about the location with a view to making it a venue for the Laser Euro Master Series 2016.

Nacra 17, F18 and 2.4 mR (Paralympic class) started off the competition at the Regata Internacional de Carnaval, in which the Laser class points will also be counted. In Nacra and F18 the Germans are leading so far and in 2.4Rm the field belongs to the Scandinavians, mainly the Swedish and the Finnish. The classification is headed by Hans Asklund (2.4 Rm), Ecki Kaphengst/Tine Kaphengst (Nacra 17), and Robert Schuetz/Rea Khuel Kev (F18).

Two oil rigs currently standing in the usual race area have obliged the competition to be moved two miles (almost 4 km) south. The Laser class sailed in the area of Mar Fea, where Lateen sailing is normally done.

The 420 and 29er classes will be joining the competition on Saturday, the second day of racing, when the wind is expected to drop.