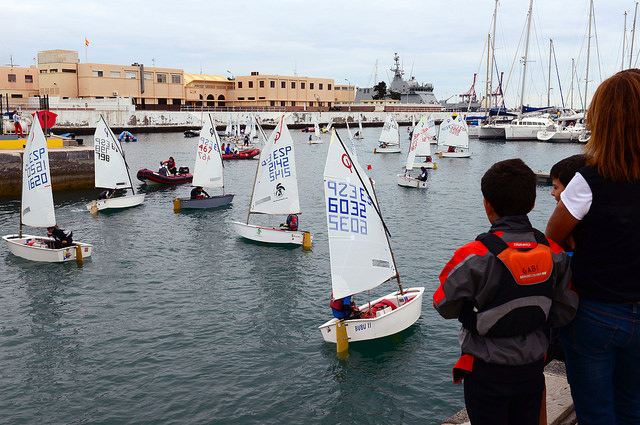 Nearly 200 Optimist sailors from Spanish regions and abroad will be battling it out this weekend in the 29th International Optimist AECIO Trophy (Trofeo Internacional AECIO Regata Ciudad de Las Palmas de Gran Canaria).
Organised by Real Club Náutico de Gran Canaria and sponsored by Las Palmas de Gran Canaria City Hall and the Gran Canaria Cabildo, this is the first race in the newly created Canary Islands Optimist Series and the inaugural race for the Optimist Excellence Cup 2014-2015.
The Cup will be held from 26-29 December and is the second event on the Gran Canaria Sail in Winter programme, a series of races that combines competition and entertainment and makes RCNGC and the city a winter sailing base for European sailing.
An increase in the number of representatives from Spanish regional sailing federations is a reflection of the rising popularity of the Canary Islands regatta, which will be a barometer of the state of this class in Spain. Some of Spain’s top Optimist sailors will be at the Gran Canaria trophy.
Some 50 competitors in this year’s race are from other Spanish regions or overseas. The competitors on the harbour of Las Palmas de Gran Canaria this weekend will be from Sweden, Russia, the United Kingdom and Morocco, and as well as the sailors from the Canary Islands, other parts of Spain will be represented, including Galicia, Cantabria, Catalonia, the Balearic Islands, Murcia, Valencia and Alicante.
Optimist is the class for beginner sailors. At Real Club Náutico de Gran Canaria alone, 120 children aged seven to 14 sail in this class.
The AECIO trophy (Asociación Española de la Clase Internacional Optimist – Spanish International Optimist Class Association) was created 29 years ago as a farewell race for children who’d reached the upper age limit in the Optimist class. The rules allow children to compete in Optimist until 31 December the year they turn 15. This means that competitors who’ve already started sailing in other classes can be racing for the trophy.
RCNGC sailors in this situation include Luis Doreste and Julio Alonso, who’ve already made their debut in 420 with a third place at the Spanish Under 16 Championship; Patricia Reino, European champion in team racing two seasons ago; and Álvaro del Busto and Álvaro Valido, who are already sailing in Laser 4.7 and have taken part in their first Spanish cup.
The competition will be tough at this year’s AECIO Trophy. The host club team will have to contend with Rubén Naranjo, who was 6th out of 355 sailors at the Ciudad de Palma race; Joel Hernández, second placegetter at the Semana Atlántico, held in Vigo two months ago; and other top sailors such as Samuel Beneyto, Eduardo Ojeda, Alberto Medina and Patricia Reino.
The winner’s name will be engraved on a plaque that he or she will keep for the year. In 2013 this honour went to RCNGC sailor Álvaro del Busto, who’s saying goodbye to the Optimist class this year.
The regatta:
The fleet will be divided into two groups each day, to allow all sailors to compete against each other. The groups will be changed every day according to the previous day’s classifications. Three races a day are scheduled, making a total of nine races.
On December 26 the competitors will be officially welcomed at an event in the afternoon, following an official training regatta at 14.00 hours.
The competition starts on December 27 at 12.00 hours. Races will start at 11.00 hours on the other two days. 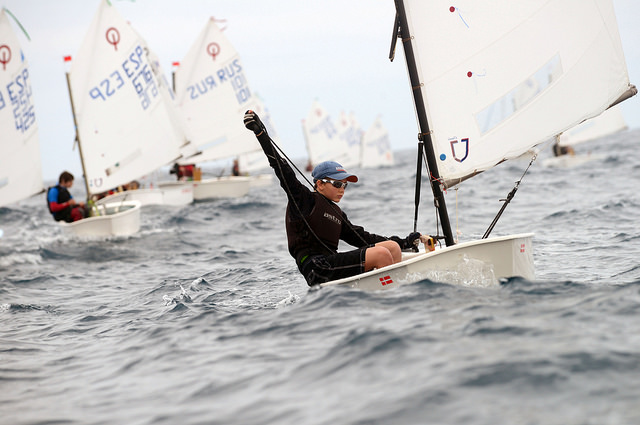 AECIO Trophy: A lack of wind prevented the start of the races scheduled for Sunday