By Karin Bumann Posted on diciembre 6, 2013 in Uncategorized 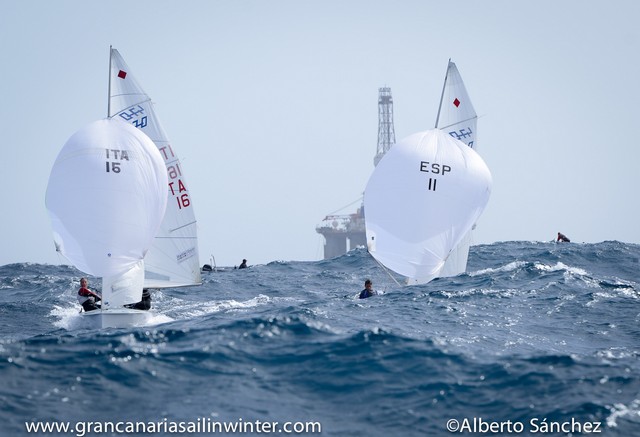 Two races were disputed for Laser Radial class, Laser Standard and 470, and one for F18, Nacra 17 and RS:X. The wind flew 5 to 6 knots northeast.

The Canary Olympic Sailing Week – El Corte Inglés Trophy, organized by the Real Club Náutico of Gran Canaria (the Royal Yacht Club), started this Thursday, 5th of December with the dispute of the first part of the races in the different classes.

At 10.30, the Race Comittee gave the start signal to all the classes to leave to the two areas of the races located in the bay of Las Palmas de Gran Canaria, with the exception of RS:X.

The Canary duo formed by Rayco Tabares and Alfredo González leads brilliantly the 470 male after two excelent partials, in the 3rd and 2nd places, ahead by a point from the second ones, the Germans Gerz and Szymansky.

The British Hannah Mills, Olympic second place in 470 in London 2012, who knows very well the bay where she was world champion in Optimist 2003 and 420 in 2006, prevailed in the two races of 470 female showing her superiority. The Italians Komatar and Carraro (7+2) were second, and the Frechs Blandin and De Bell (2+7), third.

The Italian Marco Gallo and the Polish Jonasz Stelmaszyk lead the Laser Standard qualification tied with 3 points, after having won and got a second place each of them.

The Canarian Francisco González, with 6 points (2+4) is leader in Laser Radial Male, while the Canarian Kevin Cabrera gets the second place with one more point. Third place is for the Hungarian Banjamin Vadnai, who lost the leadership because of a sanction of 3 points.

On the other hand, in Laser Radial female, the Lithuanian Viktoria Andrulyte leads having won the two races. The Grancanarian Martina Reino competed very well with two third places and gets the third position in the general one, tied with the second one, the Finnish Monika Mikkola.

Both the male and female RS:X class disputed only one race. In the male category, the Balear yatchman Joan Carles won the race, followed by the British Joe Bennet and the Dutch Kiran Badloe. The German Moana Delle won the female category in a race in which the Spanish Pilar Lamadrid and Blanca Alabau could not take part due to illness.

In Catamaran F18 the Geman crews were masters. The duo Schuetz/Odefei got the first place, followed by their compatriots Maurer and Oldenburg. The victory in Nacra 17 was for the Germans Sach and Bleich, who won the sailing race in this class against the Danish Adreasen and Christensen.

The second day of races will take place on Friday the 6th of December, when the organization of the Canary Olympic Sailing Week – El Corte Inglés Trophy expects to continue with the racing programm.