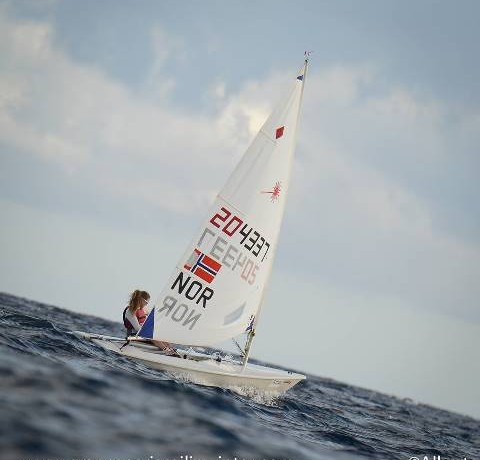 This Saturday we will be able to see the first eliminations and glimpse the places for the last race on Sunday.

Good day of regattas in the second day of the Canary Olympic Sailing Week – El Corte Inglés Trophy in the bay of Las Palmas de Gran Canaria, showing to be one of the main winter training areas and meeting point of olympic medallist, world and European champions and first level international sailors, who are offering a great level these two first days of competition.

Today two races have been held in the 7 Olympic classes and two international ones which are being disputed until Sunday, the 9th of December in the Grancanarian capital. The wind, from 5 to 8 knots southeast, allowed us to see some of the best sailors of Europe in Gran Canaria. With 4 races disputed in most of the classes, the change of leadership has been the prevailing trend today.

In 470 class male, change in qualification with the German couple Gerz/Szymansky as new leaders with 13 points, 4 less than the Russians Chans/Goretyi (17), and 10 ahead the third ones, the Italians Desiderato/Trani (23).

The British duo Mills/Clark continue unrivalled in 470 Female, with a 1st and 2nd places in the two races held today, with 5 points they go 9 points ahead the Russians Kiliuk/Dmitrieva, and 11 ahead the Frenchs Blandin/Mery de Bell.

The Italian Marco Gallo, with 11 points, still leads the Laser Standard class with just one point ahead the Polish Stelmaszyk in 4 races. The third place goes to the Spanish Jesús Rogel, who enters provisionally the podium with a 3rd and 10th place.

Change of leader in Laser Radial Male class, in which the Spanish Kevin Cabrera snatchs to his partner of Real Club Náutico Tenerife Francisco González (17) the first position with 13 points. Third place for the sailor Benjamin Vadnai and fourth for the local sailor Joel Rodríguez.

The Germans Kjakob/Brechlin are the new leaders in the Olympic class Nacra 17, thanks to the 1st and 2nd places today, which allow them to beat the Danish Adreasen/Christensen and their compatriots Sach/Bleich.

Schuetz/Odefey confirm their leadership in Catamaran F18, beating their compatriots Maurer/Oldenburg with a 2nd and 1st places in the two races, and the Grancanarian Carlos Loureiro and José Ponce, third place in the qualification with a 1st and 2nd places.

The RS:X surfboards have been able to dispute two races today. The Spanish Iván Pastor is the new leader of the class after prevailing in the two races held this Friday and getting a total of 7 points. The second place goes to the Dutch Kiran Badloe, with 10 points, and the third place is for the Portuguese Joao Rodrigues, with 12 points.

In the female category, the German Moana Delle still leads with 4 points, with a 2nd and 1st places today. Second place for the French Eugenie Ricard, with 5 points, and third the Spanish Blanca Carracedo, with 10 points.

All pictures of our regatta Canary Olympic Sailing Week on Facebook