By Karin Bumann Posted on diciembre 9, 2013 in Uncategorized 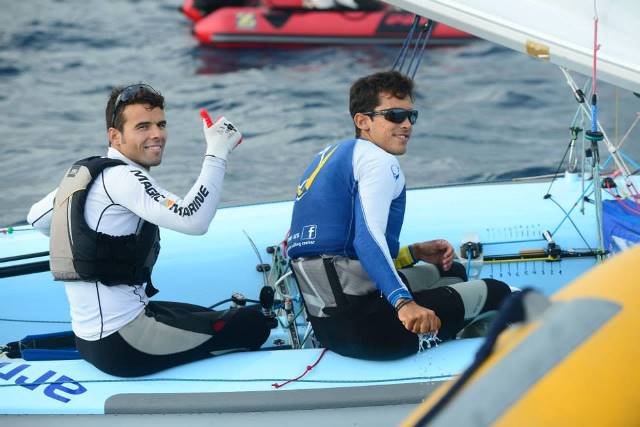 The Canary Olympic Sailing Week – El Corte Inglés Trophy puts the final touch after four days of competition in a spectacular day of races in the bay of Las Palmas de Gran Canaria with winds up to 18 knots. The participant sailors, among them medalist and Olympic diplomas, world and European champions and first-level sportspersons, clarified the final winners of the race.

The duo of the Real Club Náutico de Gran Canaria Onán Barreiros and Juan Curbelo were proclaimed champions in the 470 Male class after a brilliant last race. The Canarians did not do very well the first day with a 15th and 17th places, which they were able to eliminate after 10 races. From then on, they got places up to the 10th. The Germans Wagner/Baldewein and Gerz/Szymansky completed the podium.

The British Mills/Clark finish the competition with another 3 first places, having won 9 out of the 10 races disputes and prevailing over the Russians Kirliuk/Dmitrieva and the Italians Komatar/Carraro.

The Polish Jonas Stelmaszyk was the winner in Laser Standard, 3 points ahead of his biggest rival during the whole competition, the Italian Marco Gallo. The third place was for the Spanish Jesús Rogel.

The Finnish Tuula Tenkanen, world silver in 2013, was the winner in Laser Radial Female ahead of the Danish Anne Marie Rindon, who could not win because of a penalty, and the local sailor of the RCNGC, Martina Reino.

In Laser Radial Male the title was for the Spanish Kevin Cabrera, who, with three first places during the last day, overcame the also Spanish Joel Rodríguez and Francisco González, second and third places respectively.

In the new Olympic class Nacra 17 the Danish Adreasen/Christensen prevailed, with 8 points ahead the Germans Lenz/Susann, and the also Germans Sach/Bleich with 9 points.

The German crews took the podium in Catamaran F18, Shuetz/Odefey first, Friedrichsen/Kuehl second and third place for the duo Maurer/Oldenburg.

The Spanish Olympian in London 2012 Iván Pastor, from Alicante, prevailed in RS:X Male over the Dutch Badloe and the Portuguese Rodrigues, who took out of the podium the other Spanish teammate, Juanma Moreno.

The German Moana Delle confirmed her leadership during the whole competition by winning in RS:X female. The French Eugenie Ricard and the Spanish Blanca Carracedo completed the podium.