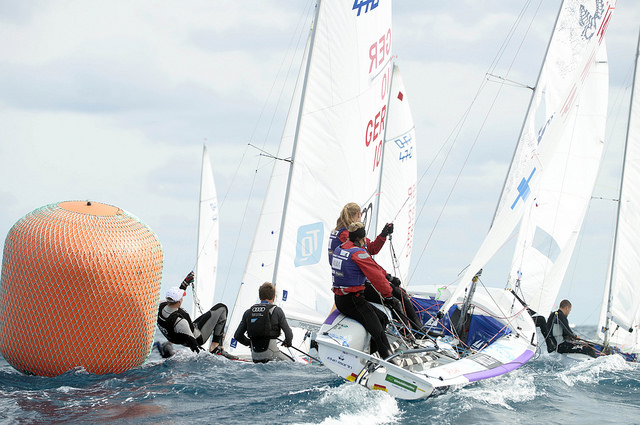 Just four points separate two crews fighting for first place in the 470 class of the 16th Canary Islands Olympic Sailing Week, due to end on Monday in Las Palmas de Gran Canaria’s harbour. Russians Pavel Sozykin and Denis Gribanov lead the race with 22 points, closely followed by Onán Barreiros and Juan Curbelo, from the Real Club Náutico de Gran Canaria sailing team, on 26 points.
Real Club Náutico de Gran Canaria is the organiser of this 16th Olympic Sailing Week, which has brought 200 sailors from 24 countries to the bay in Las Palmas de Gran Canaria. Las Palmas City Hall (Ayuntamiento de Las Palmas), Cabildo de Gran Canaria and private companies Anfi and Naviera Armas are backing the event.
The weather conditions have played a starring role in the first three days of racing. The sea and wind conditions have been very favourable and all the races scheduled have been held. The weather’s expected to remain the same for the fourth and final day tomorrow. Contestants faced 6-10 knot northeast winds today, with some shifts and a swell without strong waves.
Another Russian crew, formed by the Sheremetyev brothers, is just three points behind Barreiros and Curbelo, increasing the tension for Monday’s final.
Back on shore, the Gran Canarian sailors explained they’d suffered “too many shifts in the wind” and had problems with the second close hauls in the two races on this third day of sailing.
In the women’s 470, the Spanish crew of Marina Gallego (Club Náutico La Rápita) and Fátima Reyes (Club Náutico Arenal) moved up to first place. Spain’s Angela Pumariega, from Asturias, and crew member Patricia Cantero, from Gran Canaria (RCNGC), are holding onto second place.
Cantero explained that after the first close haul in the first race, the wind shifts had been tough on them, but in the second heat the wind had let up and things went a lot better.
The considerable Russian presence in this competition, as seen both in the results and the number of contestants, is due to coach Mikhail Zabolotnov’s conviction that “Real Club Náutico de Gran Canaria is the best club in Europe”, as he told television company Panorama Vela. The company has brought a team of professionals to the island to make programmes about the competition for Spanish and international audiences.
In Laser Standard, Joaquín Blanco is not only holding the lead after six races, but is also facing the final day 12 points ahead of his closest rival, Holland’s Yuri Hummel. World youth champion, Joel Rodríguez (RCNGC), is fighting from fifth place.
As in the men’s 470, the difference is minimal in the top places in Laser Radial. Holland’s Benjamín Wempe is just one point ahead of Kevin Cabrera, from Real Club Náutico de Gran Canaria. In third place is Lithuanian Viktoria Andrulyte, who took two firsts on Sunday.
Racing has finished in the Paralympic class, with a victory for local sailor José Guerra, who won seven of the nine races held, taking the victory from his Finnish and French rivals.
In RS:X 9.5 the lead has gone to Joan Cardona, from the Balearic Islands, who’s two points ahead of Holland’s Matthis Van’t Half. The final could go either way.
The Dutch continue to lead in RS:X 8.5. They’re closely followed by Ángel Granda, from RCNGC, who’ll be starting the last day in third place in the overall classification.
In 420, the guest class, the lead has changed. Elías Aretz and Helenio Hoyos (RCNGC) are first equal on 22 points with María Caba/Carla Díaz. Wichy Hernández and Guillermo López have dropped to third place after a penalty for a false start.

Monday is the last day. Two races are scheduled for each class. Trophies will be awarded at around 17.00 hours, depending on how the day at sea goes.