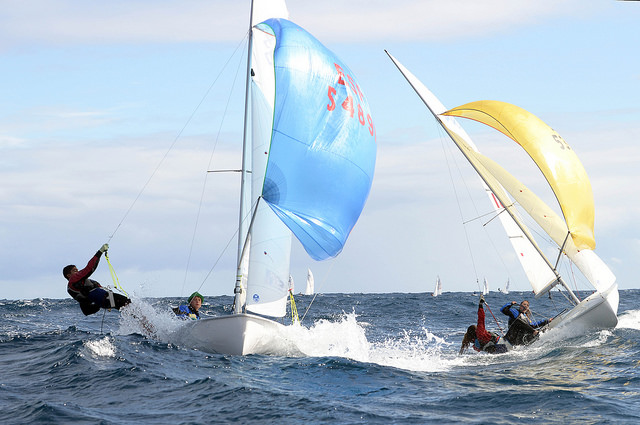 Canary Islanders Onán Barreiros and Juan Curbelo climbed to second place in the men’s 470 class on Saturday, the second day of the 16th Semana Olímpica Canaria de Vela, organised by Real Club Náutico de Gran Canaria in the bay of Las Palmas de Gran Canaria.
Two hundred sailors from 24 countries are competing until Monday in the harbour of the island’s capital city.
The Gran Canarian sailors, who are currently eighth in the international ranking, took two firsts and a ninth in Saturday’s three races. The overall classification in this class is headed by Russians Pavel Sozykin and Denis Gribanov, tenth placegetters at the Olympic class World Championship Santander 2014 with a second, a first and a third.
“We started off with a fantastic wind, lots of waves and sun – something you appreciate, especially at this time of year; in those conditions we won the first race”, said Barreiros back on shore.
The Gran Canarian sailor said that in the second regatta he fell into the water at the start and although they fought back, a bad choice in the second haul was responsible for the results.
“The squalls made the race area pretty complicated and although we won the third race, it was hard work”, he said.
The lead in the women’s 470 was taken by Russian crew Alisa Kirilyuk and Lyudmila Dmitrieva, currently in the world’s top 10 in this class. They were followed by the Spanish crew of Ángela Pumariega, from Asturias, and Patricia Cantero, from Gran Canaria.
Pumariega admitted she hadn’t been able to read the race area well due to changes in pressure and the gusts of wind and rain that hit the area throughout the morning.
RCNGC sailor Joaquín Blanco holds his lead in the Laser Standard Olympic class. Only one race was held on Saturday because of the weather conditions, which were characterised by constantly shifting winds, changes in pressure and squalls.
Spanish sailor Jesús Rogel, from Alicante, pushed his placing up to third in the overall classification, after Germany’s Tobías Schadewaldt. World Youth Champion Joel Rodríguez, from Real Club Náutico de Gran Canaria, is holding onto fourth place.
Benjamin Wempe continues to lead in Laser Radial, despite coming fourth on Saturday in the only race held in this class. Alejandro Pérez, from RCN de Tenerife, is in second place and Lanzarote’s Kevin Cabrera is third. Cabrera, a member of the RCNGC team, has won two of the three races held so far, and with the possibility of a discard tomorrow, he’s headed for first place.

Lithuanian Milda Eidukeviciute is dominating the women’s category and is fifth in the overall classification. The first Spanish woman is María Cabrera, in sixth place in the women’s category.
José Guerra, from the RCNGC team, is leading in the Paralympic class for the second day in a row. In board sailing, Spain’s Joan Cardona, from Club de Vela Formentera, is battling it out with Holland’s Matthis Van’t Half. The two sailors are sitting on 7 points each after three RS:X 9.5 regattas.
In the youth RS:X 8.5, the Dutch continue to rule, with Sam Wennekes in first place and Sil Hoekstra coming second. Ángel Granda, from RCNGC, is third, and Pilar Lamadrid, from Club de Mar Puerto Sherry, is third in the girl’s category.
The first regattas in the guest class (420) started on Saturday. The RCNGC crew of Wichy Hernández and Guillermo López is in the lead after three races.
The Nacra 17 and F 18 classes belong to the Germans.
For Sunday, the second to last day of racing, better wind conditions are expected.
Translated from Spanish by Jane McGrath 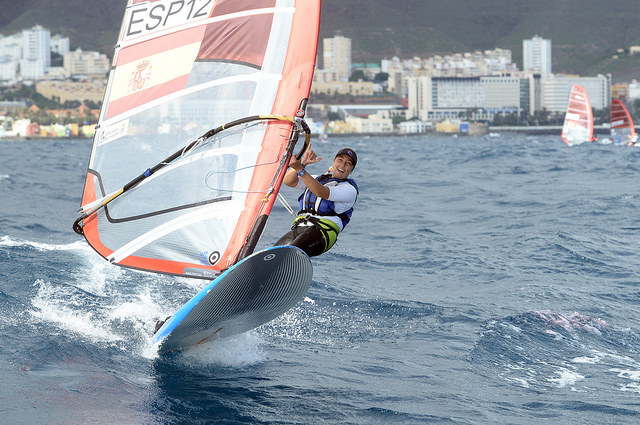