By GCSIW Posted on febrero 29, 2016 in Laser Radial, Standard Laser 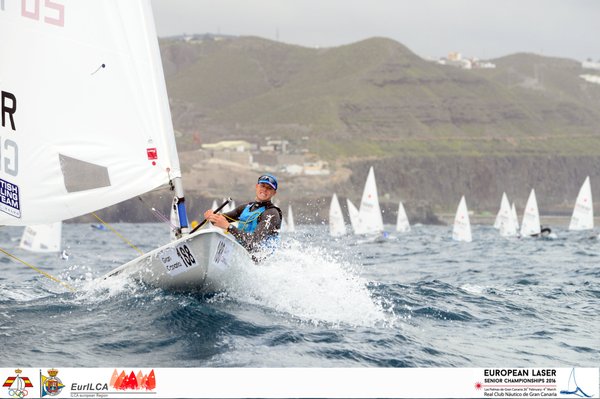 Nick Thompson leads the Laser Standard class in the European Senior Championship that kicked off this Monday in Gran Canaria. Three poles in the first three races gives the current World Champion the leading position in a demanding day with hard wind and wave conditions.

In Laser Radial the female board is headed by Dutch Marit Bouwmeester and Swedish Josefin Olsson, both with three poles in their groups. In male Radial, Marcin Rudawski is the current leader.

The first two races that kicked off the European Champinonship went fairly quickly and without any incidents at the start. Conditions were 18-20 knots and less waves than what we saw on Sunday.

At the beginning of the third race, showers cause great changes in both direction and intensity with gusts of wind of over 50 knots and changes of up to 40 degrees in the wind forced the race comittee to adjust the course accordingly.

After the wind stabilized, the race comittee decided to start an extra race and recover one of the races from Sunday. Tomorrow Tuesday has also three races scheduled, starting at 12:00.

The Laser Radial female competition is very tight, the two leaders in their own groups are tied, as well as the girls in the third position (with a 2nd and two 4ths), Finish Tuula Tenkanen and Chinese Xu Lijia -Gold medalist in London 2012.

The qualifying races will continue this Wednesday for both Laser Standard as well as Laser Radial female. Forecast seems to still give sailors strong winds, although it’s expected to ease throughout the day.