By GCSIW Posted on marzo 4, 2016 in Uncategorized 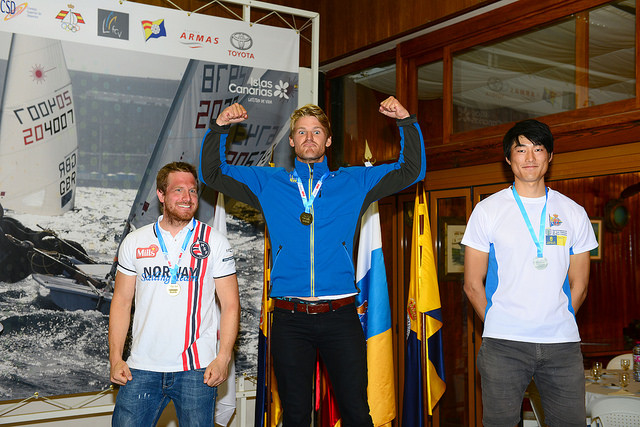 This European Laser Championship 2016 ends with 12 races that had all conditions of wind and waves, making it very exciting for sailors to compete.The event was organized by the Real Club Náutico de Gran Canaria, the European Laser Class Association (Eurilca) and the Royal Spanish Sailing Association in Gran Canaria.
The podium for this European Laser Standard championship also includes the Norwegian Kristian Ruth -Silver medal- and the Italian Giovanni Coccoluto -bronce. Josefin Olsson is now runner-up in Laser Radial women while Tuula Tenkanen won the bronce.
In Radial men the bronce is for Jonasz Stelmaszyk.
Representing Korea, Jeemin Haa won the Silver in the open championship, threatening the European domination.
The last day of the championship has offered sailors amazing conditions, with 8-12 knots and a typical long wave from the Atlantic.
Trophies were given this afternoon to the winners in the Real Club Náutico de Gran Canaria, presided by Maria Rosa Diaz-Bertrana accompanied by members such as Joaquin Blanco (representing the Spanish Sailing Association) and Ewa Jodlowska representing Eurilca.
Photos
Podium 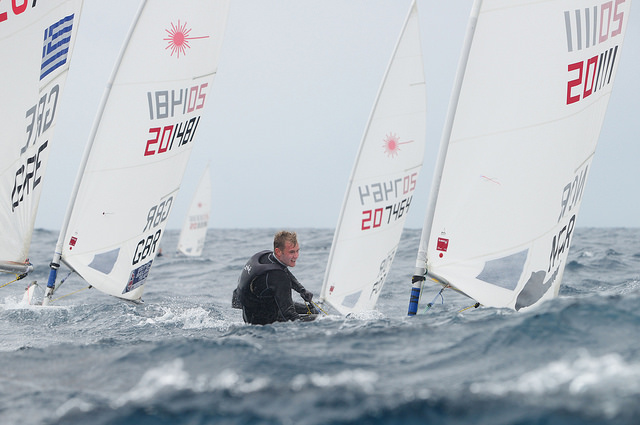 Light winds forced the organization of the European Senior Laser Championship to suspend the races in the fourth day. The Championship will end this Friday in Las Palmas de Gran Canaria.
Since Sunday all sailors have been enjoying the Alisios wind (typical wind in the Atlantic coming from the north), but today they found 1-2 knots from the south peaking at 6 knots. The Gold group in the Laser Standard Class has been the only group that started a racetoday and despite everyone’s efforts, the race had to be cancelled.
Today’s events have packed the final race for the olympic classes. There are three races scheduled for all classes. The good news is that there are  winds from the north forecast for tomorrow.
British Nick Thompson will defend tomorrow the lead position against the Argentinian Julio Alsogaray and the German Philipp Buhl -both tied at 14 points.
The Laser Radial female class is centered in the race between the Dutch Marit Bouwmesster and Swedish Josefin Olsson, both tied in almost every race and followed closely by the Finish Tuula Tenkanen and Chinese Gold medal in London 2012, Lijia Xu.
Joaquín Blanco, Joel Rodríguez, Jesús Rogel and Joan Cardona are the Spanish sailors representing the country in the Gold Group in Laser Standard. In Laser Radial female, Alicia Cebrián and Martina Reino will do their best as well.
In Laser Radial male, Polish Marcin Rudawski is taking the lad, followed closely by the Canarian sailors Alejandro Bethencourt and Ismael Iess. 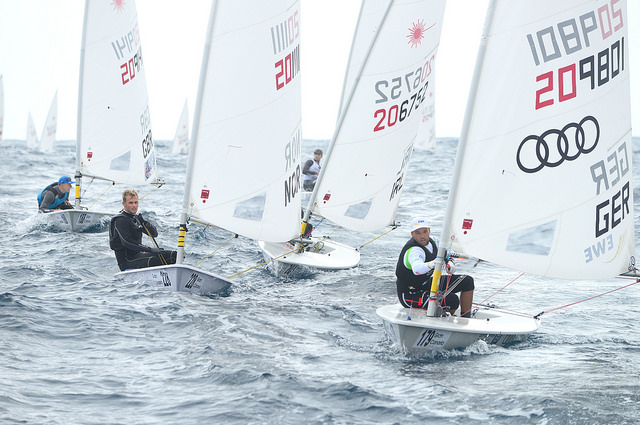