By Karin Bumann Posted on enero 5, 2017 in Uncategorized 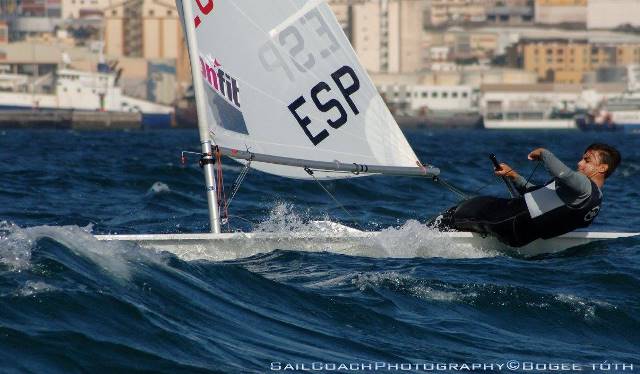 Great sight of international and local fleet in the Bay of Las Palmas.

Seven races held during two days of competition have put the best possible highlight in the bay of Las Palmas during the journey today.

The Laser Radial classes, Laser 4.7 and 420, were represented in the water by young sailors from 6 different nationalities with the desire to demonstrate their high level and their desire to offer very good strategies in the water.

Full in the first positions of this Regatta for the young sailors of the Real Club Nautico de Gran Canaria, reflected in the victories of Ismael Iess in Laser Radial that showed great skill and know-how in the water and did not yield his first position since the beginning of The competition in the different races. Meanwhile, also very regular in all tests and winner in Laser 4.7, Margarita Iess and undisputed in the water and setting the pace at all times, Elías Aretz along with Julio Alonso winners in 420.

Of note is the good role of the Greek Vasileia Karachaliou, who finished second overall in Laser Radial and girls first, followed by Norway’s Line Flem Host.

There was only one turn and change of positions among the sailors of Laser 4.7. After Iess was placed Tomás López Valle and as third Maria Mateo Ferragut who lost a position with respect to the first day of competition. All of them belonging to this Club.

In 420 the first positions didn’t move since the opening day. After Aretz and Alonso in 420, the crew that remain in the second position are Vichy Hernández and Nahuel Rodríguez and thirds the sisters Maria and Pilar Caba Hernández, also of the Real Club Nautical of Gran Canaria.

South wind that started with 12 knots, went up until 18 knots during most of the competition, and decreased again until 12 until the end of the regatta.

The young sailors of class 420 had more stability of winds in the races disputed this Thursday while those who participated in Laser Radial and Laser 4.7 did suffer some instability in the third and last race of today, having thus to face much skill and ability to achieve the best possible score.

It should be noted that the gentle temperature and the short wave helped in each test. There were bright moments in the capital’s bay, a distance of two windward-leeward laps, between the Insular Center of Sports and the Muelle de Vela Latina.

Both the fleet that enjoyed these days of competition as the organizing committee are very satisfied with the show offered by the sailors in this New Year’s Regatta.