By Karin Bumann Posted on enero 4, 2017 in Uncategorized 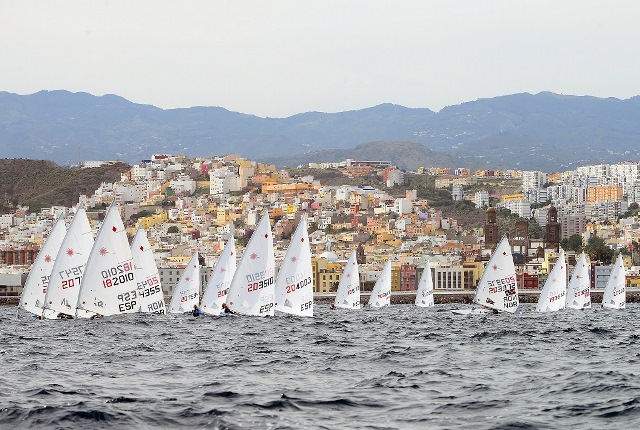 During the day, sailors competed in one fleet and it was possible to finish 4 tests. The sailing course was located in the Insular Center of Sports and the Muelle de Vela Latina.

The good weather conditions made the sailors feel comfortable and offer a great show on the water. The tests were developed with wind component south of intensity between 14 and 17 knots and short wave.

Laser Radial competition in the disputed legs, always had the top three positions taken over by the same sailors from the start. The first place was awarded by the sailor of the Real Club Náutico de Gran Canaria, Ismael Iess, second was the Greek Vasileia Karachaliou and third was the Norwegian Line Flem Host.

In Laser 4.7, Margarita Iess was the winner today. In second position and very regular also in the water, Maria Mateo Ferragut and the third place went to Luis Wanguemert. The three young sailors belong to the Real Club Nautico de Gran Canaria.

In  420 class, the first three crews are also  sailors of this Club. First, Elías Aretz and Julio Alonso who showed a good approach when sailing and were very regular, followed closely by Wichy Hernandez and Nahuel Rodríguez. The third place was for the sisters Maria and Pilar Caba.

For tomorrow, three more races are planned for this first competition of the new year in the Club. The «New Year’s Regatta» will conclude this Friday and will receive trophies the top three classified in each category.

Every year, a large number of international sailors, choose Gran Canaria to train in winter, due to the good weather conditions and the excellent facilities that are put at their service. Of course we also have the presence of some of our best sailors of the local fleet who especially enjoy sailing at home.

Samuel Beneyto from Real Club Náutico de Gran Canaria is the winner followed by Arnau Gelpí from CN El Balís and by the Swedish Calle Lagerberg.